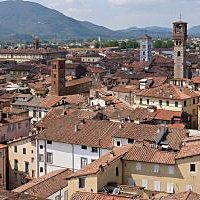 The city of Lucca, one of the most beautiful in Tuscany, is found on the plain between Mt. Pizzorne and Mt. Serra, on the left bank of the Serchio River. The city, place of arrival or passing, that deserves to be visited for its extraordinary artistic beauty & its charming atmosphere, is surrounded by a large green area and its magnificent historical centre by walls, a brilliant example of urban renaissance fortification, which today results as one of the best preserved in Europe. Other than strolling through the narrow streets to discover its beauty, it is possible to taste delicious typical local dishes and to participate in the numerous organized artistic-cultural initiatives.

Lucca is also nicknamed as the city of a hundred churches for its numerous religious buildings from different eras present within its territory, including St.Martin’s Dome or Cathedral, the main place of catholic worship of Lucca founded by San Frediano in the XI century, which has since been restored & on the inside are preserved some of the masterpieces of the artists Nicola Pisano, Jacopo della Quercia and Tintoretto; San Frediano Basilica, an antique church which preserves bas-reliefs of Jacopo della Quercia; and the church of St.John and St. Reparata, of antique origin, even if the current structure dates back to much of the reconstruction of the second half of the twelfth century.

Other monuments and places of particular interest are: the Watch tower, the highest of the 130 towers present in the medieval city and today; the national picture gallery of Mansi Palace, where it is possible to admire artwork by Tintoretto, Guido Reni and Andrea Del Sarto; and the National Museum of Villa Guinigi, hosted in the villa built by Paolo Guinigi around 1413.